Mandisa Bell: Driven by her passion for veggie farming 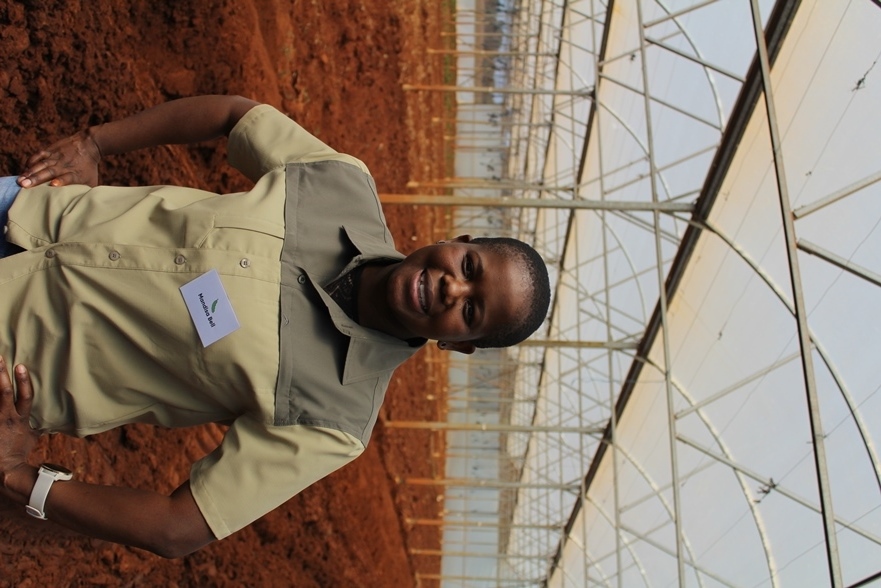 There are many challenges in the agricultural sector, but those challenges are simply fuel for a passionate veggie farmer like Mandisa Bell.

Mandisa’s farming dream is one she has had since childhood. Like many young people in South Africa, she drew her inspiration from her grandmother, who would harvest veggies from her own garden to feed her family. “When it was cooking time, she would normally go and pick veggies from her garden. That instilled the love of growing my own vegetables [in me]. In those days, we would [also] indulge in the guava and berry trees that she had in our backyard.”

The 41-year-old vegetable farmer grew up with her grandmother, Nowam Elsie Bell in Gqeberha in the Eastern Cape, South Africa and remembers the independence of their household. “For me, it was so amazing. The fact that she didn’t need to go to the shop to buy veggies. She just planted and made food out of it. We didn’t ever find ourselves without anything to eat. Back in the days, it was quite nice because people would share whatever they were planting.”

Driven by passion and faith

After graduating high school, Bell went on to study accounting and graduated from the Cape Peninsula University of Technology in 2005. While working full-time in the corporate world, the mother of two started her farming business in 2014. Currently, she is working full-time as a project cost controller, but she hopes to become a full-time farmer as soon as she has the resources. For now, she grows and sells spinach and tomatoes.

Bell views her veggie farming through a spiritual lens. “It’s therapeutic and strengthens one’s faith. When you put that seed in the soil and you water it, all you think of is the day of harvesting. But there’s no guarantee that you will reap what you’ve sowed.” She also recognizes that farmers are critical to everyone’s survival, which is another reason for her deep passion for the sector. “I have realized that with farming, one can combat the scourge of poverty. One can feed the community. As farmers, we use God’s given gifts.”

For me, having this vision of wanting to grow and feed the nation, [the challenges] don’t stop me. Whatever challenges I’m faced with, it always gives me that drive to push and to move. So, I would say, just give it your best. Yes, it’s not easy, but it’s doable.”

Farming is not an easy profession

One of the challenges Bell faces is limited access to land. She is running CeeMa Services from her backyard and the backyards of some of her neighbors. She has applied for land through the South African Department of Agriculture, Land Reform and Rural Development, but she is still waiting to hear the outcome of her application.

She says that the issue of land is only one of the many challenges in the sector, but that “the challenge of acquiring the land could make one give up on the idea of being a farmer”. Some of the other challenges, says Bell, are issues like the scarcity of rain caused by global warming and the lack of critical funding or capital to expand one’s business.

As a woman, she says that she has also been discriminated against because of her gender. “Farming is mainly dominated by men. And they will always look down on you as a woman and say ‘you can’t do ABC’.” To be a farmer is to be resilient, however, and Bell is no exception. “It’s not easy. It needs time, it teaches you to be patient, it needs discipline. But if it’s your passion, it’s something that you will do, and nothing can stop you from doing [it].”

To women trying to break into the veggie farming or other agricultural sector, she has the following advice: “It’s about trusting yourself and knowing what you want. For me, having this vision of wanting to grow and feed the nation, [the challenges] don’t stop me. Whatever challenges I’m faced with, it always gives me that drive to push and to move. So, I would say, just give it your best. Yes, it’s not easy, but it’s doable.”

Every day and everywhere, Corteva is supporting farmers like Mandisa to grow and thrive. We bring our global presence, deep knowledge and diverse resources so that farms can flourish, moving our world forward. Learn more about how Corteva is enriching the lives of those who produce and those who consume, ensuring progress for generations to come.