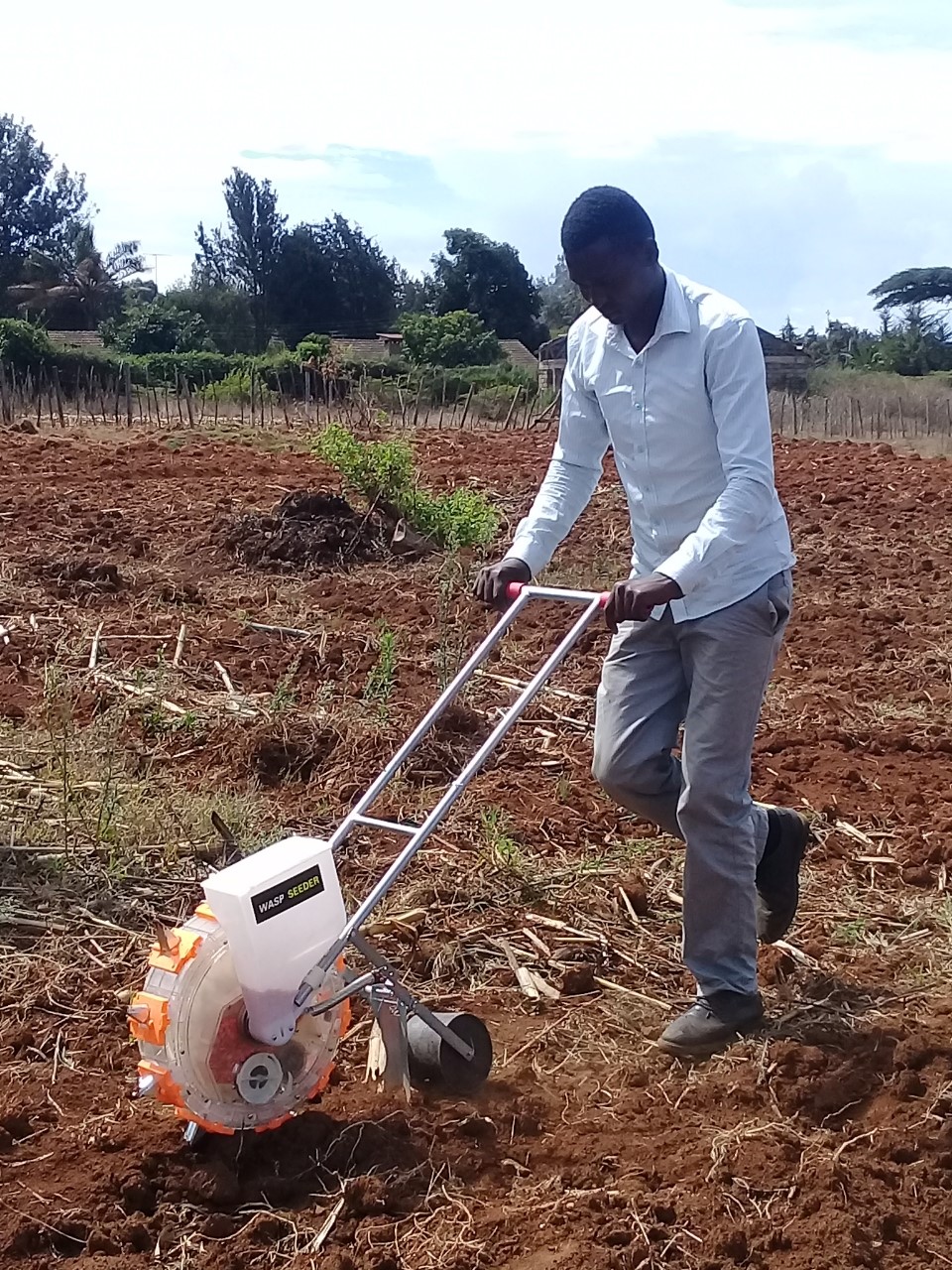 Kevin Kipkurvi eagerly filled seed tank of recently received hand driven maize planter with pink maize seeds. Being a student of Diploma in General Agriculture, he understands the importance of uniformity, timing, labour, and economics of planting maize crop. He believes more precise and economical at the time of planting you are, more profitable you will be at the time of harvesting. That’s why Kevin chose to go with a new and unusual way of planting maize with hand driven planter mostly small farmers don’t do in Kenya.

Mostly maize farmers in Kenya waste a lot of time, energy, money and seed through poor planting practices. Small farmers plant maize manually by digging holes, putting seeds and fertilizers in these holes and finally covering it with soil. It takes almost one to two days to plant an acer sometimes involving more than 10 persons as labour. As the whole process is manual, it is hard to maintain uniformity in plant to plant and row to row distances resulting lower or higher plant population per acer than desired. Manual planting does not allow uniform seed depth. Farmers usually put more than one seeds per hole to ensure germination which is an additional economic burden. All these factors result in poor germination, ununiform crop, low grain yield and less profitability.

Kevin is one of thousands of small-scale farmers who are being helped through Corteva’s global food security program in Kenya. As one of the objectives of this program is scaling agricultural technologies to smallholder farmers, Corteva-AMPATH program provided Kevin hand driven single row maize planter.

Kevin lives and looks after one and half acers of land his friend owns in Eldoret. He cultivates maize and some vegetables on this land.

“This piece of land is everything for me as I get food from this land for me, my mother and younger brother.” Kevin told me as I was visiting his place one pleasant morning.

“I have to support mine and my younger brother’s studies selling surplus maize in Eldoret market while vegetables on roadside vegetable shop run by my mother.

“Productivity is very important for me. Sometimes I have to miss my classes in school during planting season as manual planting is time taking and labour intensive.”

According to Kevin, “This planter changed my way of farming as I take only two hours to plant almost one & half acers. I am also renting it out to my neighbour farmers at 500 KSh less cost than labour, providing me extra source of income. Due to its efficiency I have no more fear of missing my classes in school.”

Read about the author Ghulam Mustafa