The effects of climate change on agriculture will be profound. Here’s how two very different farmers are learning to cope.

Farmers feed the world. We need them to now and will even more in the future. Our ever-growing world population is projected to hit 10 billion by 2050, and agricultural production must somehow keep pace.

But many farmers across the world are already struggling, thanks to the unprecedented frequency of dramatic weather events, rising temperatures, droughts, flooding, and other outcomes of climate change. Ironically, we are biting the hand that feeds us: agriculture is also responsible for somewhere between 19 and 29 percent of global greenhouse-gas emissions (the exact number is very difficult to pin down). How can we produce even more food while minimizing farming’s environmental impact?

Many farmers are taking matters into their own hands, practicing more-sustainable, climate-smart ways of growing their crops and livestock. Of course, farmers alone—even those with the most-powerful ties to their land and the most-sustainable, well-managed farming practices—cannot reverse the effects of climate change. But the methods they use can enable them to survive and thrive—to grow better, healthier food while they mitigate some of the damage from climate change. In doing so, these farmers are helping create the future of agriculture and helping to mend the planet for later generations.

There is no one way in which climate change affects all farming regions and the myriad crops grown across the globe—just as there is no single action that can solve this incredibly complex problem. In some areas of the world, rising sea levels, traumatic weather events, and warmer temperatures are undermining farmers’ ability to feed their families, let alone to make a viable living. In other places, however, the effects are more subtle. There are even regions, such as parts of northern Europe, where increased temperatures are actually improving crop yields, at least in the short term. There is no question, however, that the net effect of climate change worldwide is to diminish our ability to grow food.

The impact of climate change on our food supply is already quantifiable. A recent study from the University of Minnesota’s Institute on the Environment analyzed weather and crop data from 20,000 growing regions around the world between 1974 and 2008. The conclusion: changes in temperature and precipitation have already reduced consumable food overall by about 1 percent for the top ten crops (maize, rice, wheat, soybean, palm oil, sugarcane, barley, rapeseed/canola, cassava, and sorghum). While that may not sound like much, it amounts to enough calories—35 trillion annually—to feed more than 50 million people. Sadly, these decreases in production are most profound in the regions that are most food insecure—the very areas least able to tolerate the losses. 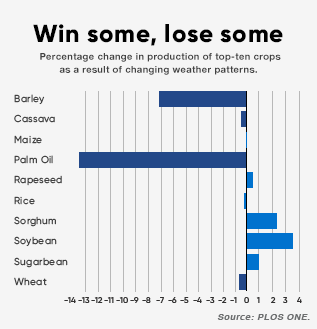 Greenhouse-gas emissions are contributing to changes that ultimately cause decreases in crop yields. As these yields diminish and demand increases, farmers in some regions are carving more farmland out of forests and other open lands—which in turn further contributes to global warming. Between 1990 and 2016, the world lost 502,000 square miles (1.3 million square kilometers) of forest, according to the World Bank.

A closer look at individual crops in specific regions tells a story that may help some areas. Climate change is reducing wheat yields by 0.9 percent each year but is increasing yields of drought-tolerant sorghum by 0.7–0.9 percent. Growing alternative crops like sorghum that can thrive in changed conditions may be one way of helping regions that are hit hardest by changed weather patterns.

Regardless of their region, the crops they grow, and how profoundly their changing climate currently does or does not affect their yields, farmers across the world are beginning to share an unwillingness to sit back and passively let climate change happen. In some areas, farmers have simply had to change the way they farm in order to survive. Even in regions where they are not currently experiencing climate change-related losses, many farmers are already doing what they can to protect the earth around them.

Farmers across the world are beginning to share an unwillingness to sit back and passively let climate change happen.

Help from the prairies

For farmers in the prairie region of Canada—known as Canada’s Breadbasket—the changing climate is both a blessing and a curse. The benefit to the province of Saskatchewan, which produces 28 percent of Canada’s grain and more than half of its wheat, is a longer growing season, thanks to winters that are already 3.1°C warmer. The milder, shorter winters enable farmers to now grow additional crops, including corn, soy, and pulses.

While that sounds like great news, scientists predict the area will also suffer more-frequent droughts and flooding, which are bad enough on their own—but also lead to more weeds and pests. Climate models project drier summer growing seasons and too much water in the spring when farmers are seeding.

Clinton Monchuk, a third-generation farmer in the prairie region and executive director of Farm & Food Care Saskatchewan, is heavily invested in both the present and the future of his land. His farming practices address the three key goals of climate-smart agriculture, according to the World Bank: enhanced resilience, increased crop yields, and reduced emissions.

The prairies are now and have always been subject to extreme variability in weather. In addition to rainfall and temperature, which are of concern to farmers everywhere, wind on the prairies, which causes soil erosion, is also a major issue. “We used to literally watch the land blowing away,” says Monchuk.

To become more resilient, Monchuk changed to minimal tillage. “It used to be that we’d get significant wind erosion when we’d till,” says Monchuk. Drought made that worse and left no moisture in the soil in which the plants could germinate. Changing to minimal tillage made a big difference. “We used to have 4- to 5-inch-deep topsoil, but we’re at about 12 inches now,” he says proudly, “and the soil moisture doesn’t evaporate.” That increased soil depth is not only good for farming; it also has a positive effect on the earth’s future: as the UN’s Food and Agriculture Organization notes, the deeper, richer soil is sequestering more carbon, which can help mitigate the effects of climate change.

Rotating crops also helps the soil store more carbon; each crop adds its own biomass to the soil, and the varied biomass helps it retain more carbon. A long-term study from the University of Illinois confirmed that crop rotation can both increase yield and lower greenhouse-gas emissions. The study showed that over the course of 20 years, corn grown in rotation with soybeans yielded 20 percent more—and reduced nitrous oxide emissions by nearly 35 percent. It is also well documented that crop rotation and cover crops can help manage pests and improve soil health. Monchuk grows canola, wheat, barley, and several other crops.

He can grow more crops in part because his farm is less vulnerable to the weather. He seeds and fertilizes together, and says, “We don’t touch the soil.” That keeps the soil more insulated and moist, “so we can grow crops with less rainfall.”

While climate change may be increasing the temperature on the prairies, they are still quite cold. Last year, Monchuk saw frost every month except July. Yet his production per acre is higher than at any other time in the past 20 years. “We’ve reduced our cost of inputs, because we aren’t double seeding anymore. But our yield is up,” he says, hitting another World Bank goal for climate-smart agriculture, “because of improved genetics and better technology.” Monchuk credits both GPS and improved seed genetics for helping him cut down on his use of fertilizer and crop-protection products.

“We aren’t double seeding anymore. But our yield is up because of improved genetics and better technology.” —Clinton Monchuk, Saskatchewan, Canada

The farming practices contributing to improved yields also help him reduce his carbon emissions. “With minimal tillage, I’m not pulling up as much dirt,” says Monchuk, which means his tractor burns less diesel fuel. “The other thing is that we’re only running the tractor over the soil once, versus three to five times.” Cutting back on his fuel use helps him control costs and reduce emissions: a win for his profitability and a win for the earth.

An army of trees

Compared with those in some other regions, the effects of climate change are relatively subtle and manageable in the Canadian prairies. On the other side of the world and the other end of the climate-change spectrum, Vietnam is already experiencing drought, increased temperatures, rising sea levels, river flooding, and more-intense weather events, according to the World Bank. With Vietnam’s varied landscape and range of crops, the specific impacts of climate change can vary greatly from one region of the country to another.

Farmers in Vietnam’s Central Highlands grow mostly coffee and black pepper—a lot of it. Vietnam is the second-largest coffee producing-country (after Brazil) and the world’s leading producer of black pepper.

Farmer Vo Ngoc Dung grows both in the Central Highlands province of Dak Lak. His high-quality black pepper caught the attention of Ethan Frisch, owner of Burlap & Barrel, a U.S.-based spice importer whose products are revered by both Michelin-starred chefs and home cooks.

But it hasn’t been easy. Prolonged drought in Vietnam has been killing the trees and leaving the black-pepper marketplace in turmoil for a number of years. After a surge in the spice’s popularity and prices, cultivation greatly expanded—including into land not well suited to growing pepper. This put additional environmental stress on areas already hit hard by climate change (including high rainfall early in the season followed by drought) and caused prices to plummet. While overall exports from Vietnam increased, revenue declined by nearly one-third.

In an interview with Viet Nam News, Nguyen Nam Hai, chair of the Viet Nam Pepper Association, said that in order to succeed, the industry had to focus on growing a higher-quality product through more-sustainable practices. That was precisely Dung’s intention when he moved back to his parents’ farm after attending university. “I realized the environment was seriously devastated, and the food was dirty, so I wanted to change these things. I love my hometown and I wanted it to be better,” said Dung.

Perhaps the most important thing Dung did was enlist the aid of an army of trees. The trees he planted help retain the groundwater, which reduces the amount of water he needs for the crops. “I rely on how natural forests work for agriculture. The forest helps keep the water and air cool.”

Dung plants muong den trees, which he says the French have planted on coffee plantations for more than 100 years, as part of his multilayered cultivation. The trees provide nutrition for the soil, shield crops from the wind, and regulate the humidity. “We use them as work machines,” says Dung. They help him experience few of the ill effects of climate change. His land is kept moist by the naturally thick organic layers created by his forest. “It is full of insects and microorganisms that live and support each other, and keep diseases away from my plants.” He says his products taste better because the watering system provided by the forest allows their inherent natural flavors to develop.

Farming for the future

For as long as humankind has grown food, farmers have been acutely aware of and sensitive to changes in weather and the health of the land they steward. Today, no industry has felt the impact of climate change more than agriculture. Farmers, whose lives and livelihoods are deeply vested in the well-being of the land, are uniquely positioned to be an integral part of the solution.

Monchuk and Dung, despite the vast differences in their local climates, the crops they grow, and the approaches they take, share one crucial trait: they are farming to nourish humans and nurture the earth. As more farmers engage in climate-smart agriculture, we can dare to dream of a world full of farms that protect earth’s natural resources while providing clean, healthy food.

“What Is Soil Carbon Sequestration?” (Food and Agriculture Organization, 2019). http://www.fao.org/soils-portal/soil-management/soil-carbon-sequestration/en/