Thanks to a range of “cool” technologies, global trade in produce is booming. Here’s how it works.

Next time you spoon up a mouthful of blueberries, consider how they came to land in your bowl.

Native to North America, blueberries are now cultivated in 27 countries worldwide. The U.S. is by far the biggest producer, generating more than half the world’s supply. But Canada, Peru, Mexico, and Spain are also top producers, according to the UN’s Food and Agriculture Organization, with output in Peru alone leaping from zero in 2010 to more than 52,000 metric tons in 2017—almost half the size of the entire global market in 2001—to meet rising worldwide demand. So great is America’s appetite, in fact, that the U.S. actually imports more fresh and frozen berries than it exports, with 50 percent of them coming from Chile between November and February.

Yes, we rely on far-flung nations to supply us with our local specialty produce. Why? What makes the global sourcing of specialty crops possible, let alone desirable?

Horticulture—fruits, vegetables, and flowers—turns out to be a significant revenue generator for countries worldwide. In 2017, it accounted for $220 billion of the $1.2 trillion global agriculture trade. And because berries and other fruits account for more than half the value of this segment ($114 billion), countries have stepped up their cultivation and production of these specialty crops for export markets. Worldwide blueberry production alone has nearly tripled since 2000, from 211,000 metric tons to almost 600,000, thanks to the fruit’s “superfood” status and long shelf life. 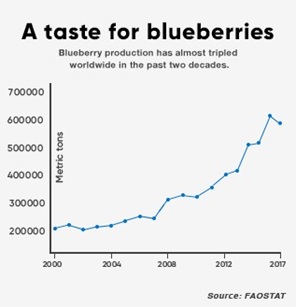 In short, big U.S. producers profit by selling their blueberries abroad and allowing imports to answer unmet domestic demand. But that begs the logistical question: how is it that fresh produce can travel across oceans and remain appealing as well as affordable?

Technological advances in storage and distribution during the past 40 years have extended food’s shelf life while lowering its transit costs. Growers now chill produce within hours of harvest to temperatures just above freezing. Those temperatures are maintained in a so-called cold chain from farm storage facilities to supermarket shelves, thanks to insulated packaging and “reefers,” or refrigerated containers, that move goods via truck, rail, and ship. For long-distance travel, refrigerated containers of produce are infused with ozone (O3) or a mixture of nitrogen and carbon dioxide, creating an environment that slows down the respiration, or exchange of gases, that leads to further ripening, mold, and decay.

So effective is this unbroken cold chain in preserving freshness that perishables like blueberries can make a 20-day transoceanic journey (what it takes for a container ship to travel from Chile to California), spend another week traveling to regional warehouses and wholesalers, and still arrive in stores with two weeks of additional shelf life available for the consumer.

And what brought about these produce-distribution technologies? The evolution of the supermarket, says Tim Woods, an extension professor at the University of Kentucky who specializes in agribusiness management and marketing. Until the late 1970s, he explains, grocers in developed economies were strictly local or regional entities that relied on a network of wholesale terminal markets for their fresh produce.

But as the increased use of refrigerators and freezers at home encouraged consumers to buy and store more food, grocers got the signal to expand. The bigger they got, the more important it became for them to control their supply chains. So they started setting up their own regional distribution centers, cutting out the middleman wholesaler in order to lower costs and increase efficiencies. “All the innovations we see in transportation, refrigeration, and dedicated supply chains,” says Woods, “have been driven by national food retailers needing to get produce from farm to consumer quickly and cheaply.”

As the increased use of refrigerators and freezers at home encouraged consumers to buy and store more food, grocers got the signal to expand.

In turn, the sheer volume of perishables purchased by big retailers has dramatically altered the supplier landscape. Giant retailers’ success depends on having a constant supply of produce that complies with stringent food-safety standards and whose every movement and handler can be traced, lest there be an outbreak of food-borne illness. So the Walmarts of the world contract with giant producers, even if they’re located in other countries. When the fixed costs of wholesale infrastructure are spread over a huge volume of goods, distribution costs dwindle to insignificant levels.

“It costs a small grower in Cincinnati more per pound to bring fresh berries 90 miles to Lexington than for a reefer to bring 40,000 pounds of fruit here from Watsonville, California,” Woods explains. “California growers participating in these large supply chains have no distribution-cost barrier. And the same is true of growers even farther afield. Economies of scale have accelerated global sourcing.”

“It costs a small grower in Cincinnati more per pound to bring fresh berries 90 miles to Lexington than for a reefer to bring 40,000 pounds of fruit here from Watsonville, California.” —Tim Woods, University of Kentucky

Finally, there is a difference in labor costs between countries like the U.S. and Chile—particularly for produce like strawberries, tomatoes, and peppers, which still have to be harvested by hand. The U.S. imports fully a third of its fruit and about a quarter of its vegetables, despite having the capacity to produce them domestically, says Woods, because inexpensive labor abroad makes it pointless to invest in U.S. capacity. “The labor differential is what supercharges global sourcing,” he says.

This doesn’t mean there isn’t a robust domestic market for U.S. blueberry growers to tap, however. In season, says Ken Chilvers, a small producer in Glasgow, Kentucky, local demand is so great for his top-grade highbush berries that he cannot keep up with it, even though he charges twice as much as Walmart.

“It’s all about ripeness,” Chilvers says, explaining that once a berry is picked, its sugar production ceases. “Berries from Chile are tart, because those growers can’t wait until the fruit is ripe to pick and ship it. I can, because mine will be delivered tomorrow to my customers—who’ll pay double the price to get that sweetness they can’t get elsewhere.”

Together, these consumer habits—occasionally paying more for local varieties but usually relying on cheap imports—explain why the global food system is here to stay: its supply chains are just too efficient to dismantle. And they’re getting more efficient by the day. “Amazon can get you limes for your Coronas in a matter of hours,” says Woods. “If you can spend a few minutes online and get a good-quality product at an affordable price delivered to your doorstep, why wouldn’t you?”

He adds, “We’re not turning back, that’s for sure.”