Consumer electronics giants such as Panasonic are expanding into indoor agriculture.

When the news first broke several years ago that Panasonic was growing lettuce in a warehouse in Singapore, it was tempting to think of it as a kind of lark—an exotic branding exercise meant to show the ever-expanding depth and breadth of new electronics technologies.

The results have proven otherwise. Panasonic is now an established and growing player—if still a small one—in Asia’s agricultural marketplace, selling primarily to local grocers and restaurants. And it is not alone. Several of its rivals are engaged in similar experiments in diversification into vertical agriculture far beyond their core electronics businesses. What’s driving these high-tech high-fliers into this low-margin business? And what’s in it for them?

Not business as usual

A look inside Panasonic’s hydroponic operation reveals that there are indeed the predictable high-tech bells and whistles: automated farming systems do the seeding, potting, and irrigation. Plants grow under intelligent LED grow lights in a room whose temperature, humidity, and carbon dioxide settings are electronically controlled at levels that hasten and maximize plant growth.

But the electronics company is taking the enterprise seriously. It has more than quadrupled the farm’s square footage and output in the past few years. Its lab-coated farmer engineers now run a facility of almost 13,000 square feet that yields more than 80 tons of produce annually.

Meanwhile, in 2016, Fujitsu joined forces with Masuda Seed and Orix, a private equity firm, to use cloud-based technology to grow produce indoors in a facility in Japan, while Toshiba has also dabbled in leaf-vegetable production. In Dubai, Sharp recently debuted a high-tech strawberry-growing operation built around its Plasmacluster air-disinfecting technology. Many of these efforts are supported by governments in Asia that are looking for solutions to concerns about the scarcity of arable land and food sustainability. One estimate places the market for vertical indoor farming in Asia at $4 billion by 2024. 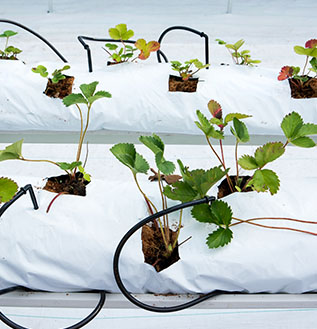 “It’s super interesting to see these companies starting to play in farming, where you go from the highest tech margins to the lowest margins possible,” says Allison Kopf, founder and CEO of Agrilyst, a tech company that harnesses data to help indoor farm operators build their businesses. The depth and intensity of the connection between the electronics companies and agriculture crystallized for her last year in China, when she toured a facility operated by BOE Technology Group, a Chinese maker of intelligent interface products like cell phone displays that, in a not-unrelated development, is also in the LED business. “The carryover opened up a new market for them,” she says. “And it makes sense—the technology definitely overlaps.”

Neil Mattson, associate professor at Cornell’s School of Integrative Plant Science in the department of horticulture, studies indoor growing. He points out that the factories are eerily suited to what growers need—predictability in an increasingly unpredictable world. These companies already produce electronic components in clean rooms with tight environmental controls that ensure impeccable air quality, lest any floating contaminants end up in motherboards or other highly sensitive equipment. “A clean-room protocol is really good in terms of food safety and infectious-disease issues,” Mattson says.

The indoor factories also mitigate food-supply issues arising from the changing climate. California’s unusually wet winter several years ago, for example, triggered shortages in spinach crops, causing the vegetable to virtually disappear for a time from stores on the East Coast. “The thought is that as the climate changes, we’re going to have to be more conscious of transportation and water and so on,” says Mattson. “And we don’t have to worry about wild animals, we don’t have surface-water irrigation sources, so there’s a lot less potential for contamination, and it’s a lot easier to control checkpoints.”

Growing in these kinds of controlled conditions is also several times more efficient than conventional farming in terms of water and fertilizer use and the use of space, Mattson notes. In 2015, researchers from Arizona State University found that lettuce grown in a hydroponic system used about a tenth of the water required with conventional methods. Scientists at the University of Nevada-Reno came up with a similar finding in a study focused on strawberries. These kinds of results prompted the authors of the Arizona study to note that hydroponics “could become a strategy for sustainably feeding the world’s growing population, if the high energy consumption can be overcome through improved efficiency and/or cost-effective renewables.”

Mattson concurs that the main issue right now is the power required for the lighting systems—and that research into LEDs may hold the solution. “Energy is the current sticking point,” he says.

All of these overlaps in technology and marketplace demand have made for some intense buzz. Back in the U.S., for example, the indoor farming startup Plenty recently announced it had raised $200 million in funding. A Panasonic spokesman told one media outlet: “We foresee this business to be a potential growth portfolio, given the global shortage of arable land, increasing populations, climate change, and demand for high-quality and stable food supply.”

But can it scale?

For all the deserved excitement, though, there are good reasons the electronics companies so far have mostly only dabbled in their respective enterprises. Serious questions remain about whether vertical farming is viable at any sort of significant scale. One problem is energy: indoor farms use twice as much as a greenhouse in the same climate, Mattson says, and significantly more than it takes to grow crops in a field and to ship them thousands of miles.

There are reasons why no dominant company has emerged, and they have to do with climate and geography, and the challenges inherent in shipping delicate foods like lettuce and strawberries. “Globally, you’ve got an industry that’s been around for decades and decades, but it looks very, very different in different regions,” Kopf says. “There are similarities that carry through, but as far as technology goes it looks very different because of geography. There’s no real standardization, which makes it hard for a clear market winner to evolve.”

In China, Kopf saw companies dabbling in agriculture using government subsidies, or opening farms on a one-off basis as a kind of experiment in ways to build market advantage, she says. The farming enterprises essentially amount to elaborate R&D programs—experimental efforts to determine whether produce can become a high-value product. “It feels very much like the Wild West,” Mattson says. “I like to say the hardware of intelligent lighting is farther advanced than our physiological understanding of plants. So a company can deliver these lights to the market, but we don’t truly know the best way to operate or use those lights.” 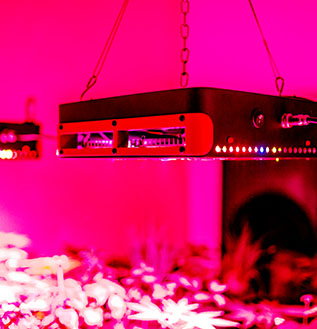 The reasons to bet on these counterintuitive types of business expansions? One is simply that these companies are deeply experienced at manufacturing and shipping products at scale. Mattson also says to expect improvements in LEDs and the understanding of how to use them—refining what companies refer to as their “light recipes.” Meanwhile, the continued evolution of robotics will drive down overhead.

One key question that remains is whether electronics companies really want to own and run the farms, or just provide the technology to run them. Either way, it’s safe to say that if you live in Asia in the not-so-near future, your lettuce and your Bluetooth headphones might very well have something very much in common.

The Future of Land