Singapore tops this year’s Global Food Security Index. How well prepared is it for the risks of climate change?

When consumers in developed countries browse the brimming shelves of our local grocer for their next meal, they rarely register just how vulnerable this spectacular abundance really is.

But food security—having access to sufficient amounts of safe food that meets the dietary needs of all—is one of the greatest challenges facing modern society. Every natural disaster or trade skirmish puts this global network in peril. As it is, almost a billion people go to bed hungry every night. Meanwhile, population growth will add 2 billion more people by 2050, even as the specter of climate change threatens to put our global food system at even greater risk.

Six years ago, in hopes of understanding better just how secure the world’s food supply is, the Economist Intelligence Unit (EIU) began publishing the Global Food Security Index, sponsored by Corteva AgriscienceTM, Agriculture Division of DowDupont. This year’s edition, called Building Resilience in the Face of Rising Food-Security Risks, ranks 113 countries in terms of three overall categories: the quality and safety of their food supply, its affordability and its accessibility. Beginning last year, the EIU added a fourth variable—Natural Resources and Resilience—designed to measure each country’s exposure to the impacts of a changing climate; its susceptibility to natural resource risks; and how it is adapting to these challenges, though it is not factored into overall country scores.

Last year, the EIU added a fourth variable—Natural Resources and Resilience—designed to measure each country’s exposure to the impacts of a changing climate.

The 2018 results come as something of a surprise. The top-ranked country overall was Singapore, even though the Southeast Asian city-state must import 90 percent of its food. And Slovakia ranked highest in the Natural Resource and Resilience category. A closer analysis of the results reveals what it takes for a country’s food supply to be secure, now and in the future.

Perhaps the biggest surprise this year was Singapore’s rise to the top of the list, for the first time, up from fourth in last year’s index, which was led by Ireland. Singapore’s ascent is largely attributable to its wealth. GDP per capita there has risen nearly 30 percent since 2012, reaching an all-time high of more than $55,000 in 2017, and it spends less money on food as a percentage of GDP per capita (6.9 percent), than any other country on the list other than the U.S. (6.2 percent). Singapore also has low import tariffs on agriculture, which helps to keep food prices low. As a result, the city-state topped the ranking for affordability, while ranking 15th overall for availability, and 24th for quality and safety.

“We are encouraged that Singapore has consistently ranked well in the EIU-GFSI Index,” says Lim Kok Thai, CEO of the Agri-Food & Veterinary Authority of Singapore (AVA), and CEO designate of the newly configured Singapore Food Authority, which will take over all the food-related activities of the AVA in April 2019. “We welcome the affirmation of our efforts in safeguarding food security, despite our constraints in resources and land. It also helps us to see where we can do better. We will continue to work closely with our industry stakeholders on areas where we are vulnerable.”

But all is not perfect in Singapore. (See The Singapore Paradox). Because the country imports 90 percent of its food supply, it is susceptible to trade and supply-chain disruptions and is highly vulnerable to risks from climate change and scarce natural resources. In fact, Singapore ranks just 103rd in Natural Resources and Resilience; when this category were factored into the country’s overall score, its ranking drops to 16. (See “Food Security Tomorrow”.)

“Given that Singapore is an island-state and located near the equator, it is subject to rising sea levels and temperatures,” says Robert Smith, a public policy consultant with the EIU and an author of the survey. “And given that it is largely dependent on food imports, trade disruptions (related to either climate change or geopolitical risks, or both) could pose a serious threat to the country.”

To counter these factors, Singapore launched the Farm Transformation Map in 2017 to guide its farming sector in four areas: physical space, innovation, people development, and the ecosystem. Says the AVA’s Lim: “We recognize that our food security is also vulnerable to global driving forces and trends, such as population growth, rising urbanization, incomes, climate change, disease outbreaks and scarcity of resources. These trends are intensifying, and their interplay is heightening food security challenges more than ever. We will take a multi-prong approach comprising food-source diversification, local production, and internationalization of our food supply.”

As part of its efforts to diversify its food supply, the AVA is working on several food sourcing initiatives—creating connections between local food importers, farmers and retailers and potential overseas exporters, for example. “We want to facilitate networking and increase imports of food from non-traditional source countries as well as explore new potential source countries for the supply of food to Singapore,” says Lim.

The AVA has also commissioned a study on the effects of climate change on the country’s food supply, which will help determine the risk profiles of local food farms and existing farm practices. The results of the study will guide the AVA’s efforts to better advise farms in mitigating the effects of climate change. Such efforts are already bearing fruit. Case in point: Sustenir, an indoor vertical vegetable farm, has adopted technology that allows it to be climate-resilient and able to maintain a more stable yield in a controlled environment. The result: better productivity and less waste of resources like water and electricity.

In contrast, Slovakia, a mountainous country nestled between Austria, Poland, Hungary and Ukraine that ranks just 35th overall, overtook Denmark as the top-ranked country in the Natural Resources and Resilience category this year, thanks to its recent efforts to effectively prevent and mitigate the effect of droughts before they happen, rather than dealing with their impacts after the fact. 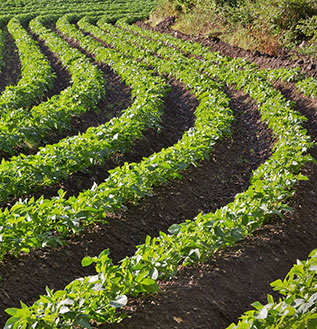 After a series of severe droughts in 2015 and 2017, during which some parts of Slovakia experienced the driest weather in over six decades, in 2018 the country launched what it calls the Value of H2O program in collaboration with the Global Water Partnership (GWP), an international network of organizations to promote sustainable management and development of water resources. “The focus of the programs is to develop projects to modernize irrigation systems and water management as well as to modify forests and wetlands to better withstand the effects of climate change,” says Richard Muller, the GWP’s regional director for Central and Eastern Europe. Slovakia has also instituted a plan to supply water to different sectors of its economy, notably agriculture and forestry, during prolonged droughts.

Together, these measures should mean that if and when there are long, dry spells, their effects will be mitigated, and Slovakia’s food supply will be more secure. “It’s important to change the attitude of the experts towards the importance of green infrastructure, as the main focus of the plan is on preventive measures in a number of areas, specifically agriculture and forestry, urban landscape, water management, research, and environmental education,” notes Muller.

The future of food security

By gaining an understanding of the risk and resilience of their food systems, countries can better anticipate, absorb and recover from the shocks and challenges to their production, distribution, and consumption of food. Global climate change will create unprecedented challenges, and is already introducing considerable uncertainty into the conditions needed for adequate food production and distribution, the index notes. Preparation is essential if the world’s current food systems are to become more resilient. Think of the index as an early warning system for the long-term effects of climate change on global food security.

From Farm to Smart Phone

Agriculture at a Crossroads