If you’re a lover of gourmet coffee, you’ve probably tried—or at least heard of—Kenyan coffee. The East African country is responsible for less than 1 percent of the world’s coffee, but it’s famous for the quality of its premium arabica beans. Kenyan coffee holds four of the world’s top 30 spots for taste and value, according to Coffee Review, including the No. 2 ranking, and it’s highly sought after by major international companies, including Starbucks Corp.

For these accolades, you can thank a small governmental organization called the Coffee Research Institute (CRI). With established research stations across the country, the CRI is dedicated to optimizing the country’s sustainable production of coffee—Kenya’s third-largest export, after tea and cut flowers.

According to a Global Agricultural Information Network report published by the U.S. Department of Agriculture, the Kenyan coffee industry faces a host of challenges, including continued urbanization, erratic weather conditions, competition from other crops and farm enterprises, increased operating costs, damage by pests and diseases, and poor marketing. It’s largely thanks to the CRI and its efforts to work in partnership with Kenyan coffee growers large and small that the industry is as healthy as it is today.

Kenya’s economic development has been intertwined with coffee farming since 1893, when the first plants took root in the red, volcanic soil of the Kenyan highlands. The country’s best years seem to have mirrored the coffee industry’s biggest financial booms, and the beans have boosted the Kenyan economy for many decades.

Yet coffee farming used to play an even larger role in the country’s economic life than it does now. Production reached a peak of more than 120,000 metric tons annually in the 1980s, thanks in part to international quota regulations that determined how much every coffee-producing nation could produce. But when that system collapsed in the early 1990s, coffee prices plummeted while input costs increased. Many farmers abandoned their coffee plantations in favor of other income streams, while an increasing number of young Kenyans lost interest in the industry and flocked to the cities in search of education and white-collar employment.

As a result, annual coffee production dropped dramatically, and now hovers around 40,000 metric tons. “The [coffee] industry generates about US$150 million annually and contributes about 0.25 percent to the GDP and 8 percent to the agricultural sector,” says Dr. Elijah Gichuru, director of the CRI. “It contributes about 30 percent of the total employment in the agricultural sector, supporting about 5 million people due to its effective forward and backward linkages.”

All of this has made research and national support more important than ever, and that’s where the CRI comes in. Established in 1964, just after Kenya gained independence from Britain, the foundation conducts research along the entire coffee chain, collaborating with growers across the country to enhance the industry’s production, productivity, profitability and sustainability.

To that end, the CRI also offers a range of essential services to farmers, including soil and leaf analysis and the production of certified seeds, residential training, advisory services and chemical analysis for the optimal use of pesticides, fertilizers and the like.

“Research is important to provide solutions to the existing and emerging challenges and opportunities in the coffee industry, as well as providing backup information to policy-makers,” says Dr. Gichuru. “Our main goal is to enhance wealth creation in the industry for better livelihoods. The results of our projects enhance the production and profitability of coffee farming.”

The CRI is part of a larger governmental organization known as the Kenya Agricultural and Livestock Research Organization (KALRO). Created under the Kenya Agricultural and Livestock Research Act of 2013, KALRO refines and regulates research on a variety of the country’s key crops and livestock. It also provides research grants, promotes training, disseminates research findings and performs a range of other services designed to improve yields and increase the sustainability of the agricultural sector.

If you’re looking for a clear example of the impact and importance of coffee research, look no further than a bean called Batian. Introduced by the CRI in September 2010 and named after the highest of Mount Kenya’s three peaks, this revolutionary coffee variety boasts resistance to the two major diseases that plague the industry: coffee berry disease and coffee leaf rust. 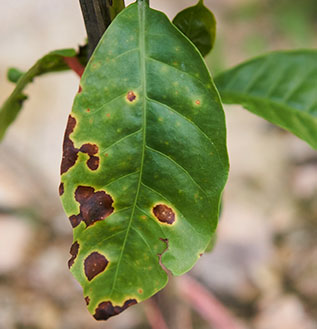 “Both Batian and Ruiru 11 [another variety introduced by the CRI] are popular, as they increasingly replace the previous varieties, which are susceptible to coffee berry disease and coffee leaf rust,” says Dr. Gichuru. “All of them produce high yields and excellent quality.”

These diseases don’t just attack the plants; they put the entire coffee industry at risk, reducing both yield and farmers’ profits. Coffee berry disease alone can cut a harvest by up to 60 percent, according to a recent study published in Phytopathology. Thanks to Batian, “farmers save up to 30 percent of the production cost due to reduced chemical usage,” Dr. Gichuru told Kenya’s Daily Nation. “After five years, a tree of the Batian variety should produce at least 20 kilograms of berries.”

The introduction of Batian has brought hope to many farmers who were struggling to combat disease and were beginning to abandon coffee farming in favor of crops such as beans and maize. “From the 10 kilograms of seedlings [supplied by the government in 2014], I managed to produce 30,000 trees, which I grew in nurseries, and which I have already distributed to farmers at Sh6 [US$0.06] per tree, paid for by the county government,” said coffee farmer Rose Njeri in an interview with Daily Nation.

In addition to developing new, improved varietals, the CRI’s work addresses a range of important issues, including soil fertility management, alternative brewing methods, the development of alternative commodities from coffee by-products, and the expansion of coffee production to new areas of the country.

The CRI’s efforts hold the key to a sustainable, profitable future for coffee farming in Kenya, a country that clearly puts more thought, energy and effort into your daily brew than even the most attentive barista. Indeed, its determined support of one of the country’s most important crops should serve as a model for the kinds of public-private collaborations that could sustain agricultural production in other developing countries across the globe.