Explore Burundi's coffee industry and its importance to the its economy and the nation’s millions of coffee farmers.

No country on earth faces the challenges Burundi does. The landlocked Central African nation, with a population of 10.5 million, suffers from an average per capita GDP of just US$808. Long torn by ongoing political upheaval and violence, Burundi’s challenges include corruption, poor infrastructure, limited access to health services and education, and widespread hunger. Its economy is heavily dependent on its agriculture sector, which accounts for half the country’s GDP. More than 90 percent of Burundi’s people depend on subsistence farming, and the average farm size is little more than an acre. Of the 156 countries ranked by the U.N.’s World Happiness Report, Burundi comes in last.

Taken together, it’s a sad state of affairs. A significant part of the struggle to relieve the poverty that plagues the country is focused on its single most important crop by far—coffee. Can the many current efforts to support the Burundi coffee industry make a difference? And what are the economic risks inherent in depending so heavily on Burundi coffee?

In 2017, Burundi exported about 14,000 metric tons of coffee. That’s a tiny drop in the bucket of the huge international coffee trade, but many Burundians depend on the coffee industry for their very survival. It provides a source of income for a large percentage of the country’s estimated 600,000 coffee farmers. And it accounts for anywhere between a third and two-thirds of the total value of the country’s exports, depending on the year. 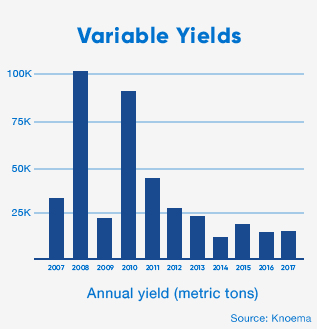 The ill effects of depending so heavily on just one crop are exacerbated by the unstable yield of Burundi’s coffee crop. The 2018 crop came in at less than half of the all-time high of almost 40,000 tons harvested in 1994. According to a United Nations report, coffee production has fallen an average of 6.6 percent annually since 2001, which many blame on the 2010 privatization of the industry. And the country’s coffee production is highly volatile, varying from a low of 6.2 tons in 2006 to a high of 30,000 tons just one year later (see “Variable Yields”). To make matters worse, the actual financial value of the annual crop depends largely on the highly volatile prices offered by local processors and on international coffee markets.

There are many causes of this instability—all of them challenging. Varying weather conditions play a large role, of course, but so do the country’s aging coffee trees, long-term degradation of the soil, and inadequate supplies of fertilizers. Poor farming practices are exacerbated by a lack of extension services that would help farmers be more productive, while volatile prices force farmers to shift their efforts to different crops from year to year. Unsurprisingly, many have given up on coffee farming entirely. The country’s weak infrastructure severely limits the efficiency of its coffee supply chain. There are few means to support coffee farmers in improving their farming practices, and their lack of access to information on market prices for their crops makes for an even more volatile and asymmetrical market.

Still, there is hope. For one thing, Burundi grows great coffee. Properly washed and processed, it is frequently rated as one of the best coffees in the world. “Burundian coffee is finding its place,” says Ben Carlson. “The complex flavor profile distinguishes [it] from others in Africa, but the reason it has been hidden is it is hard to find and difficult to export.” Carlson and his wife, Kristy, run the Long Miles Coffee Project there, where the two Americans have built a washing station and work with 4,500 small-scale growers to better control the quality of their coffee and boost the price they receive. As a result, their coffee is certified as “direct trade”— a level of certification even more “direct” from the growers and roasters than fair-trade coffee.

The challenge, however, lies in producing more of that great coffee and getting fair prices for it locally and in international markets. Efforts like the Carlsons’ are a start, but many more like them are needed to benefit a sizeable chunk of Burundi’s coffee farmers and processors.

Coffee growers have gained greater control over the supply chain, reducing abuses on the part of middlemen like the many privately held washing stations and exporters.

On a local level, the rise of coffee cooperatives and of the National Confederation of Coffee Growers of Burundi (CNAC) has mitigated the adverse effects of the privatization of much of the industry’s infrastructure, a process that began in 2008. Coffee growers have gained greater control over the supply chain, reducing abuses by middlemen like the many privately held washing stations and exporters. The result has been more stable prices and improved farmer income. 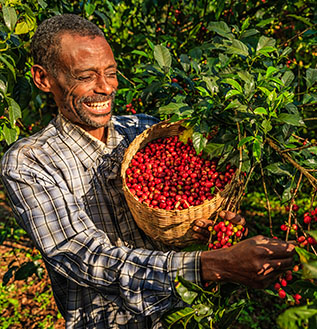 International efforts have helped, too. The Global Coffee Platform (GCP), a consortium of coffee growers and producers hoping to boost and coordinate the sustainable production of coffee, recently issued a report analyzing the many needs of Burundi’s coffee sector. An investment of $43 million over 10 years in farmer training, coffee tree rejuvenation and agricultural inputs, the GCP argues, would reap $144 million in value for the industry, raising farmers’ incomes by 20 percent.

To that end, the World Bank has gotten involved, pumping $55 million into its Burundi Coffee Sector Competitiveness Support Project. Goals include increasing the productivity of the country’s coffee farms and the quality of the coffee; improving the country’s coffee infrastructure and supply chain; and improving access to markets. Begun in 2016, the initiative has boosted output from 15,000 tons to an estimated 18,000 tons in 2018.

The goal, according to Emmanuel Niyungeko, head of Burundi’s coffee regulatory authority, is to increase exports to 22,000 tons of coffee in 2019, and to boost that to 30,000 tons in 2022. That’s an ambitious goal, perhaps, for an industry beset by so many challenges. A stronger coffee industry will by no means solve all of Burundi’s many problems.

It can even be argued that boosting coffee output may only make matters worse. The stronger the country’s coffee sector grows, the more reliant its entire economy will become on it. It’s an especially cruel twist on the concept of the “resource curse,” the “paradox of plenty”—countries dependent on a single resource, whether it’s Angola’s oil or Chile’s copper, have been shown to have higher levels of poverty and to develop more slowly than those with more diversified economies. Many countries in sub-Saharan Africa suffer this fate—Malawi depends heavily on tobacco to boost its foreign currency reserves, for instance. Like Burundi, Malawi’s tobacco sector seems perpetually under the triple threat of unpredictable harvests, volatile prices and ongoing political instability.

The long-term solution for all countries cursed by dependence on a single resource is economic diversification. But for the time being, that’s a lot to ask of countries like Burundi. In the meantime, a stronger coffee industry that provides greater support and fairer prices to Burundi’s farmers would make a big difference to the millions of Burundians whose very livelihoods depend on it.

Carlson of the Long Miles Coffee Project puts it bluntly: “Coffee must succeed for Burundi to succeed.”