Sorghum, a drought-resistant, nutritious and gluten-free grain, has real potential for fighting world hunger and malnutrition.

Can sorghum save the world? Maybe not all by itself, but it could certainly help.

Consider the benefits of sorghum. It’s impressively drought resistant and rich in protein and essential minerals, and its versatility can benefit growers in several ways, especially in developing countries. But sorghum isn’t perfect. It can be slow to digest, it’s viewed in some markets as a low-status food, and it can be poisonous to livestock under certain conditions.

In a world threatened by climate change, especially in regions that most need viable drought-proof crops to improve food security, sorghum’s pros far outweigh its cons. And scientists and public officials are making real strides in boosting its benefits even further. 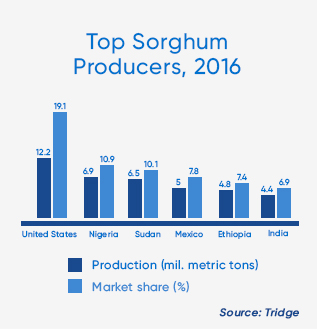 Sorghum, also called jowar or milo, was first domesticated some 8,000 years ago in sub-Saharan Africa. It  is the world’s fifth most widely cultivated cereal after maize, rice, wheat and barley. Almost half the sorghum grown around the world, however, is used for animal feed and forage, as an ingredient in alcoholic beverages, and to make biofuels.

The U.S. grew the most sorghum—about 12.2 million metric tons in 2016, about 20 percent of total global production—but just 3 percent of U.S. production went to food for people. Of the next four top producers, three are in Africa—Nigeria, Sudan and Ethiopia—and much of the sorghum grown there is destined for human consumption, with what’s left over used as animal forage. (See “Top Sorghum Producers.”)

And sorghum’s value as food is undisputed. Simply put, sorghum is nutritious. A cup of this healthy grain delivers 22 grams of protein, or 43 percent of the recommended daily amount, plenty of carbohydrates, and half the recommended daily amount of iron and phosphorous. It’s also a good source of niacin, thiamin, magnesium, copper, calcium, and potassium, and it is a gluten-free grain. 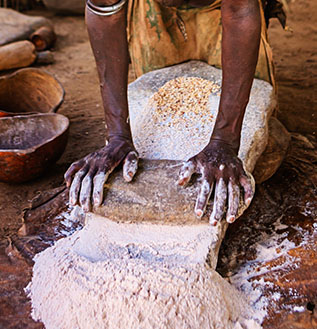 “Sorghum is rich in energy, protein and most micronutrients,” says Dr. Are Ashok Kumar, a principal research scientist at India’s International Crops Research Institute for the Semi-Arid Tropics (ICRISAT). “It is superior to rice and wheat for most nutrients and fares at par with corn.”

Scientists are working on improving sorghum’s nutritional value even further in hopes of combating micronutrient deficiency, a challenge for many in sub-Saharan Africa and South Asia, where up to 80 percent of the population in some countries is affected by the lack of key nutrients.  The Africa Biofortified Sorghum project (ABS), which began in 2005, is using biotechnology to create sorghum varieties containing higher levels of beta carotene, zinc and iron that the body can absorb more efficiently. ABS is supported by Africa Harvest, Corteva Agriscience™, and the Bill & Melinda Gates Foundation, among others.

And because the protein in sorghum is digested slowly, researchers are developing varieties that are lower in tannins and phytic acids, which are present in varying degrees in different sorghum varieties. Tannins contain health-promoting antioxidant properties, but they also give off a bitter taste and can decrease the speed of protein intake, while phytates reduce protein’s digestibility.

The hope of sorghum rests on its drought resistance when it comes to being grown in arid climates. That’s important as the world grapples with climate change. Indeed, there are sorghum varieties that can be grown with as little as 300mm (about a foot) of annual rainfall or irrigation, which is important as sub-Saharan Africa becomes more arid. “Sorghum is much more drought tolerant than rice, wheat, [or] maize,” says ICRISAT’s Kumar.

Researchers have long known that certain sorghum genes naturally turn on or off depending upon the amount of water that’s available. To study which varieties do better in arid climates, the Kearney Agricultural Research and Extension Center in Parlier, Calif., uses drones to measure plant height and the biomass of new sorghum varieties. “The key issue with climate change is you anticipate it getting hotter and dryer,” says Jeff Dahlberg, the center’s director. “That’s an opportunity for sorghum.”

Other research efforts focus on plant health, and can range from controlling Striga, known as witchweed, which can crowd out the crop, to managing pests such as the sorghum shoot fly and stem borer.

As healthy as sorghum is, it is of little use in developing countries if people don’t want to eat it. That’s the biggest constraint when it comes to increasing production in Africa and other developing countries. In many countries, Dahlberg notes, the very poor traditionally eat millet and then switch to sorghum as their income grows. But as it grows even further, they often move on to more expensive foods with higher status—corn, then rice, then wheat. So if the supply of sorghum is to grow, demand among people with more income, and especially in urban areas, must be increased in order to provide a strong market for sorghum farmers.

This is where marketing can help. ICRISAT’s Kumar is a firm believer in the role of national governments in encouraging people to continue to eat sorghum. For instance, in India, a new millet mission campaign, designed to encourage consumers to eat both millet and sorghum, began in 2018. Dahlberg offers the example of a get-back-to-ancient-grains movement in Senegal. Initiatives like these point to the development of more ready-to-eat, processed sorghum products such as ready-to-cook cereals and flatbreads throughout Africa and South Asia.

“The key element to increasing demand in Africa will be the development of stable, more industrialized usage of sorghum in broader food and beverage products,” says Tim Dalton, the director of the Feed the Future Innovation Lab for Collaborative Research on Sorghum and Millet at Kansas State University in Manhattan, Kansas. “Farmers need to have trust in the market, and processors need to be reassured that there is a stable supply of grain for their needs.”

Sorghum’s versatility—the fact that it can be used not only as food for people but also as feed and forage for animals—could also increase demand in Africa, providing farmers with more-stable markets for their crops. Some sorghum naturally produces prussic acid, which can be poisonous to livestock when used as pasture or if it’s not cured properly. But using the right sorghum varieties and managing when sorghum is used for forage can negate these effects.

Taken together, the benefits of sorghum far outweigh the drawbacks. Florentino Lopez, the executive director of the U.S. Department of Agriculture’s United Sorghum Checkoff Program in Lubbock, Texas, calls sorghum “a workhorse that can provide a lot of stability in a lot of different areas. It’s very easy to interchange it and to use in a variety of different marketplaces.”

“We are already experiencing climate change, and sorghum is one crop that has a lot of resilience,” concludes ICRISAT’s Kumar. “I see great hope for sorghum.”