Brazilian-born researcher Camila Ribeiro circles the world to ensure that the future of agriculture is sustainable.

“We need creative and transdisciplinary people to build a new paradigm in agriculture. It is fun, it is yummy, and the way nature works is just abundant, clever, and rewarding.”

Camila Ribeiro does. Ribeiro was speaking to a reporter while attending the Crawford Fund’s 2018 annual conference in Canberra, where young agricultural researchers gather together to network, meet established researchers, and discuss the key issues facing the Australian and global agriculture industry.

The exuberant 30-year-old is just one of many young people now embarking on a life of agricultural research, and she exemplifies the passion and commitment to change that the field requires if we are to meet the challenges of feeding a growing world. 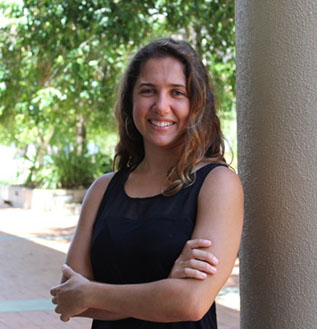 Born and raised in Brazil, Ribeiro was first exposed to agriculture in the course of her volunteer work. “I fell in love with agriculture when I volunteered in medium and smallholder organic farms in Brazil, Peru, Bolivia and Argentina,” she says. That love has taken her halfway around the world. Currently doing research at the Tropical Forests and People Research Centre in Sippy Downs, Australia, she is also a Ph.D. candidate in agricultural sciences and forestry at the University of the Sunshine Coast on Australia’s eastern shore.

Following her early training in the social sciences, Ribeiro hopes to apply the humanist lessons she learned to how people operate their farms. Farming is, ultimately, by and for human beings, she believes. “While volunteering I got in contact with local knowledge of sustainable farming practices,” she says. “Some of these fundamentals can be applied to large-scale agriculture as well.”

Ribeiro’s multifaceted approach is appreciated by many of her collaborators. Dr. Lin Chau Ming, an ethnobotanist at São Paulo State University in Brazil, worked closely with Ribeiro on his project to reconcile the sustainable farming practices of local people with the increasingly urgent demands of international agriculture. He says of Ribeiro: “As an agronomist with a social sciences background, she has an ability with indigenous peoples, and with other kinds of growers.”

Ribeiro’s primary research focus is on sustainable agriculture, and she’s fascinated by the interactions between plants and soil, and how ecological succession impacts growth. But as a world-ranging researcher, she also considers how local conditions and people fit into the natural and international matrix.

“Every part of your life involves agricultural processes, from the food you eat to the shirt you are wearing. Even the water you drink depends on agriculture,” she points out. “If it is done irresponsibly, not too far in the future none of that may be available. Contributing to sustainable agriculture is contributing to the perpetuation of our species on this planet. That’s exciting and also urgent.”

Ribeiro’s urgency is reflected in the broad range of projects she has contributed to in her native Brazil. Most recently she served as an agronomist at Unique Fazendas, managing the growth and productivity of coconut and neem in Trairi, Brazil. Picture her out inspecting the fruiting coconut trees for insects and disease, dodging falling fruit, and training the local workers in sustainable practices. “I love being out in the fields and meeting farmers, extension agents, indigenous peoples, other researchers,” she says. “It doesn’t matter how much formal education people have had. They always have something to teach us.”

"I love being out in the fields and meeting farmers, extension agents, indigenous peoples, other researchers." 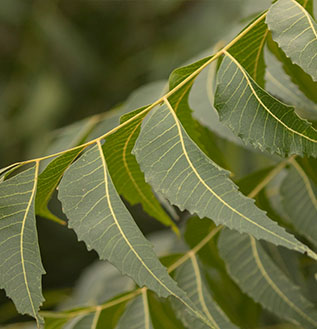 The production of neem is a good case in point. This evergreen, native to India, has been used for centuries by indigenous peoples as a medicinal plant. Ribeiro counts the locals she meets among her most valuable teachers, even in an academic career that ping-pongs her among the brightest international minds in agronomy. “Local peoples understand climate, plant uses and other topics in a whole different and empirical way,” says Ribeiro. “We should listen more to what the people in the fields have to say, and integrate that into scientific knowledge.”

An evergreen native to India, neem has been used for centuries by indigenous peoples as a medicinal plant.

This mix of academic research and local expertise is becoming increasingly important as we face a food-insecure world. Indigenous people have much to teach us about agricultural methods, but those very methods are at considerable risk in the decades ahead. According to the Food and Agriculture Organization (FAO) of the United Nations, there are some 350 million people around the world who maintain the indigenous farming practices that have sustained them for generations. They account for 5 percent of the world’s population, but about 15 percent of its poorest citizens. Increasingly, their villages and fields have been targeted by outsiders intent on converting fertile land to profitable crops.

Ribeiro worked in the midst of that divide with the Paresi people of Brazil, who have survived for centuries by cultivating maize, beans, sweet potatoes, pineapples, sweet and bitter manioc, yams, tobacco, and cotton. Recently, their way of life has been threatened by new agricultural practices, and by the pests and plant diseases they can bring.

It’s a clash of cultures and cultivation, but in Ribeiro’s view, it doesn’t need to be. “The need for agricultural frontier expansion is quite a delicate subject, especially in Brazil, and especially now,” she says. “The two cultures could work together if more-sustainable farming practices were applied and proper policy regulation happened.”

Ribeiro is also working on a kind of cultivation that doesn’t involve seeds in a row, but rather relationships in the growing zones: “The scientific community has evolved quite a lot in terms of responsible agricultural practices,” she notes. “It is just a matter of commercial interests, academia and policymakers communicating better amongst each other in order to implement changes.”

Despite the challenges, Ribeiro is excited by the work that lies ahead of her. She finds hope in syntropic agriculture (a method aimed at integrating high productivity with large-scale regeneration of non-arable land), new strategies for integrated pest management, biological control of pests and diseases, and participatory plant breeding, which involves breeders and farmers working together to develop plant species appropriate to specific locations.

But it’s still a battle, in her eyes. “Unfortunately, there are agricultural practices that can cause severe damage to the environment and societies, and these impacts will need fixing,” she says, recalling her experience helping the Paresi people preserve their traditional plant resources. “The world will call out urgently for professionals who know how to design and implement productive agricultural systems which can, at the same time, serve as land and watershed rehabilitation techniques. Hopefully, it won’t be too late.”

Ribeiro’s lifework is clearly laid out for her. And we all have a stake in her success.