For decades, India experienced nothing less than an agricultural miracle. Beginning in the 1960s, the nation’s highly touted “green revolution” brought modern farming practices, new seed technologies, and pro-farmer policies to a woefully backward farming sector. Production of wheat, rice, maize, and sugarcane, among other crops, increased to the point that by the 1970s India was able to meet all of its domestic food needs. India now ranks second only to China in the gross value of its agricultural production, according to the UN’s Food and Agriculture Organization.

Fluctuating crop prices, problematic government subsidies, and lack of training, however, have all had an adverse impact on Indian farming. But perhaps the key challenge is the country’s diminishing water resources. “India is facing a serious and prolonged water crisis in the immediate future,” says Haritha Saranga, a management professor at the Indian Institute of Management Bangalore.

The recent severe drought conditions in Maharashtra, Tamil Nadu, and other states are making it all too painfully clear just how serious the problem is. India’s government has had to issue advisories limiting water to residential use, cutting off water not just to agriculture but to other critical sectors of the economy as well.

As dire as the situation is, both NGOs and the Indian government are making considerable efforts to reduce the pressure on India’s water supply. But will they work?

As dire as the situation is, efforts are being made to reduce the pressure on India’s water supply. Will they work? 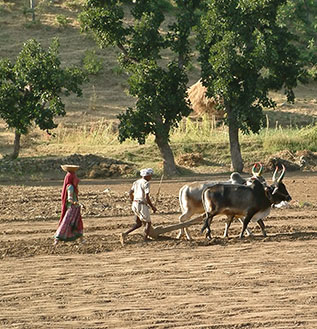 India’s geography and climate have largely determined the current state of its water use. Fifteen percent of the planet’s people call India home, but the nation holds a mere 4 percent of the world’s water. With such limited resources, farmers have long relied on seasonal monsoon rains to jump-start crops and fill aquifers—in fact, more than 50 percent of India’s cropland is entirely dependent on rain. But 13 of the past 18 years have delivered deficit monsoon rainfalls, erratic distribution of rainfall, and higher temperatures, which many have attributed to climate change.

The effects have been severe. During the most severe years of deficit, production of crops most dependent on the monsoon tends to decline. During the 2014–15 growing season, for example, production of rice fell 4 percent, of pulses 10 percent, and of oilseeds 16 percent. In 2016, more than 15 million hectares of crops were affected, and the government’s relief package of more than US$200 billion did little to alleviate the distress.

The most common prescription for farmers working with too little water has been irrigation. But that hasn’t happened at a scale that’s anywhere near adequate, which leads to the next issue—government policies. As one 2018 study in the International Journal of Development and Sustainability noted, water in India “has not been well managed” and the problems “are largely institutional, structural, and administrative”—perhaps a predictable outcome in a country famous for its large and complex bureaucracy.

Moreover, the government has set aside far too little water behind dams for dry-season use: just 7,522 cubic feet of stored water per person in 2017. By comparison, the U.S. harbors nearly 70,000 cubic feet per capita, and China almost 40,000, despite the fact that India uses almost twice the amount of water those two nations require for their fields. 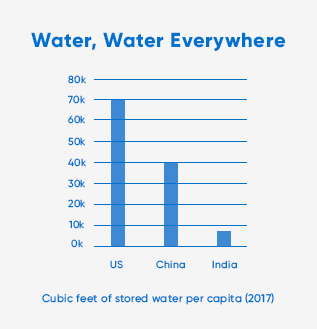 The recent reelection of the Narendra Modi–led government has generated renewed promises to complete the many irrigation projects already promised. And in late 2018, the World Bank announced plans to pour US$172 million into a program to help poor and marginalized Indian farmers—largely by helping build 1,000 small-scale, community-based irrigation systems spread across “the 12 most climate-vulnerable districts” of Andhra Pradesh.

Meanwhile, farmers across India are making increased use of a number of water conservation measures. These include drip and sprinkler irrigation (far more efficient than traditional methods), alternate wetting and drying practices, and planting crops on raised beds and in rows.

Also promising is a rice cultivation practice called “dry seeding,” in which rice is planted directly into the soil rather than being transplanted from seedlings into flooded fields. The process uses far less water, and less labor as well, though it may produce less reliable yields.

A further problem is India’s approach to subsidies and price controls, which tend to favor especially water-dependent crops. Some of the top beneficiaries of the government’s various price support programs are growers of sugarcane, rice, and wheat—all thirsty crops that drive up water consumption. The government exacerbates this problem by providing free water and electricity to some farming sectors but not others. “The crisis is all about lopsided management,” says Shambhu Ghatak, a researcher and writer at the Inclusive Media for Change Project.

Professor Saranga sees potential for change in a universal basic income, the idea being that it would be distributed more fairly, and with greater beneficial effect, than current agricultural subsidies. In fact, following the recent election, the Modi government has renewed promises to provide a basic income of 6,000 rupees to every farmer. “If this gets implemented widely,” she says, “one hope is that all other forms of agricultural subsidies will have to be eliminated to generate funds for this initiative. If that happens, hopefully, farmers will stop the unsustainable farming they are currently practicing.”

Farmers also face a dilemma in deciding what to grow, and where. Farmers and consumers alike would benefit by shifting to production and consumption of crops like millet and jowar (sorghum), which require significantly less irrigation. But the options facing farmers are poor. They can roll the dice with crops like millet that might be better for the land but whose prices fluctuate wildly and that aren’t subsidized as generously. This has not proven to be a promising course; between 1995 and 2015, almost 300,000 Indian farmers committed suicide, according to India’s National Crime Records Bureau, for reported reasons ranging from low crops prices and high levels of debt to the already apparent effects of climate change.

The alternative is to stick with high-margin but thirsty crops like rice and sugarcane—and potentially bankrupt the land for farmers’ offspring. A 2018 study by the Indian Council for Research on International Economic Relations (ICRIER) lamented the continued cultivation of rice paddies in relatively dry Punjab, in the northwest, noting the “high social cost incurred in terms of fast depleting water table, which will impact the sustainability of agriculture and welfare of future generations.” The study also called out the unsustainable situation in Maharashtra, another relatively arid region, where sugarcane crops occupying less than 4 percent of the growing land suck up almost two-thirds of the state’s irrigation water.

The ICRIER study served up some commonsense solutions—for example, shifting water-intensive crops to areas with greater aquatic reserves, like the verdant subtropical state of Bihar. Simple marketing efforts highlighting the benefits of growing certain crops in certain regions could also help. The study called for price reforms in water and power use around agriculture—and, failing that, implementing a rationing system for farmers and reducing water usage through drip irrigation and other conservation practices.

Solving India’s water issues isn’t just about providing enough water. Like everything in a huge and complex land like India, the answers lie in addressing many deeply interconnected issues. Crop price subsidies need to encourage proper land use; financing for water projects needs to be made available fairly; farmer incomes need to rise to a level at which farmers will be incentivized to use their land wisely.

If such moves are carried out, and NGOs keep up their efforts to supply new infrastructure and training, then India’s water crisis may be alleviated—to the benefit of all engaged in agriculture there.